Lockdown announcements: The impact on currency

The Coronavirus outbreak has had a profound impact on the world economy, inflicting the deepest global recession since World War II.

The UK was far from immune to this economic pain: it suffered a 9.8% drop in GDP in 2020, the steepest decline since consistent records began in 1948.

This damage to Britain’s economy is reflected in the fluctuating value of the pound, which slumped to its lowest level in decades last year. Whilst there is no doubt that COVID was the ultimate cause of these fluctuations in sterling’s value, it is worth asking questions about the events and announcements that led to the biggest falls in the pound’s value.

What impact do lockdowns have on currency value?

A quick look at a pound/dollar exchange graph might seem to suggest that the first lockdown announcement had a profound impact on the value of the pound. As can be seen in the below graph, the pound to dollar rate hit its lowest point ($1.147546) on March 23, the day that Boris Johnson announced the first in a series of lockdowns:

However, it is worth noting that the fall in value against the dollar really got underway from March 10 onwards, two weeks before lockdown was announced: whilst the pound to dollar rate was at a healthy $1.312715 on March 9, it had plummeted to $1.154781 by March 18, a 12% decline in less than two weeks.

The biggest losses against the dollar that occurred in March took place on March 12 (-$0.032093) and March 18 (-$0.050285). The fall on March 12, which saw the pound drop to $1.253667, down from $1.28576 on March 11, appears to have been due to the Bank of England deciding to cut its main interest rate from 0.75% to 0.25% on March 11. A fall in the value of the pound was widely anticipated following this decision, as a decrease in interest rates often leads to a devaluation in the currency. March 11 also saw President Trump suspend travel from Europe and the WHO officially declare the COVID-19 outbreak a pandemic. These announcements seem to have also played a part in the FTSE 100 falling by 10.9% on March 12, its biggest one-day loss since October 1987.

Rishi Sunak’s announcement of a £330bn stimulus package on March 17 was widely regarded as key driver in the fall in the value of the pound on March 18 to $1.154781, down from $1.205066 the day before. Many anticipated a massive increase in UK government borrowing, with the issuance of UK government IOUs, or gilts, that this entails. Under these circumstances, it is understandable that traders and investors would anticipate a fall in the value of the pound. 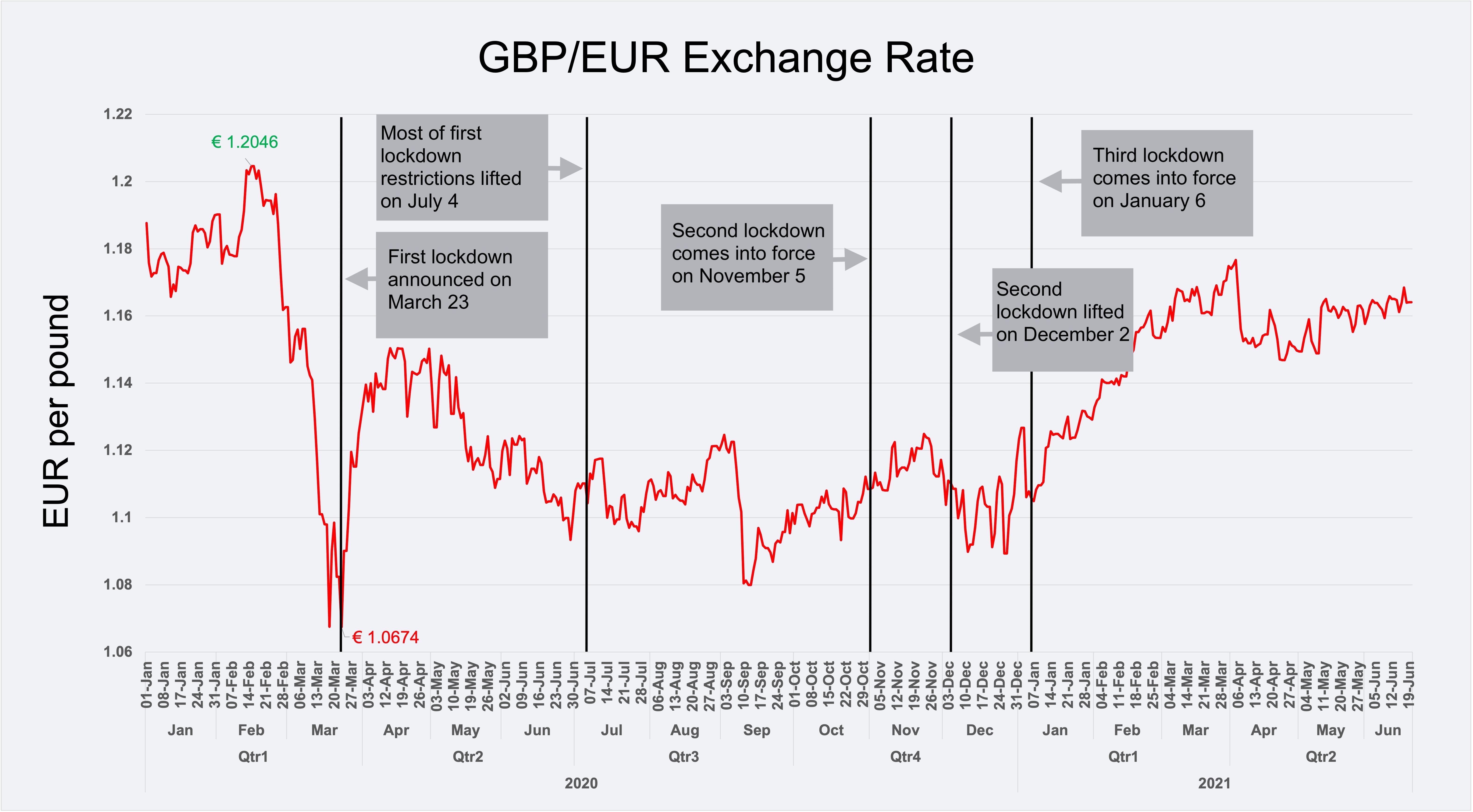 Again, however, the decline in the value of the pound against the euro really got underway before this point, from February 26 onwards. What is most striking is that the first lockdown announcement was immediately followed by a recovery in the pound’s value. This recovery has continued into mid-2021, restoring the pound’s value against both currencies to pre-pandemic levels.

What this seems to suggest is that other factors play a far more important role in shaping sterling’s value than the announcement of lockdowns, such as i) other UK government announcements, i.e. concerning furlough and interest rates, ii) decisions made by foreign leaders, iii) Brexit, iv) pronouncements from organisations like the WHO and v) vaccination roll-outs.

Whilst the road to recovery has been rather jittery, there is no obvious connection between the introduction and lifting of lockdowns and the value of the pound. Far stronger connections can be made with Brexit negotiations: the increase in the pound’s value in July 2020, for example, occurred amid rumours of an agreement of an imminent agreement with the EU on fishing rights.

What will increasing vaccination rates affect the FX market?

This argument becomes stronger when one considers the recent performance of the pound sterling. With the Brexit deal agreed in December 2020 and the vaccination rollout getting underway in 2021, the pound traded at $1.36 at the beginning of 2021, its highest level since May 2018. This came despite the UK entering its third lockdown.

The successful rolling out of vaccines in the UK and the USA has been widely credited with restoring the value of the pound and the dollar. We can expect the euro to appreciate as increasing numbers of people throughout Europe receive their vaccinations.

As lockdowns become increasingly accepted as part of the ‘new normal’, the effects that lockdowns might have will be increasingly ‘priced in’ by investors and currency traders.