It’s time for a worthwhile look back at what has gone before in the past 12 weeks in the major currency markets, as well as looking ahead to what might be to come in Q3 and beyond.

GBP hits multi-year high against the USD in Q2, but don’t buy the USD weakness

What are some of the key events that have occurred in Q2?

- UK delay final phase of unlocking for four weeks (to 19th July) as cases of delta variant rise amongst unvaccinated.

- US states loosen restrictions or remove them altogether.

- Inflation spikes in US and hits 2 year high in the UK.

- Some smaller economies begin the process of unwinding monetary stimulus in the face of quicker recoveries and rise in inflation.

- Markets see a further reduction in volatility as economies normalise.

- US Federal Reserve hint at withdrawal of stimulus and interest rate hikes to come earlier.

- UK and EU dispute over Northern Ireland Protocol rumbles on.

- Risk appetite falls back as Covid-19 problems fail to go away (late Q2).

The last quarter has been much different to Q1. In Q1 there was a growing sense of optimism in most economies that the pace of unlocking might be faster than the governments in Western Europe and the United States had indicated. In Q2, that optimism faded, and was instead replaced by growing pessimism that Covid-19 was mutating too often to allow as rapid a re-opening as previously hoped for.

However, the news from most economies has been encouraging, on the whole. Firstly, most forecasts for growth have been revised up, in some case significantly. Moreover, the damage done to labour markets has seemingly been far less severe than expected.

So, at the end of the quarter, what might we reflect on in terms of market moves in Q2?

The USD – struggling for further strength into Q3

The USD has broadly clung on in the face of sustained and intense pressure. Indeed, towards the end of the quarter the dollar made some renewed gains, backing away from testing multi-year lows. A rally against the Chinese renminbi through June, a rebound against the euro, and USD/JPY breaching ¥110 repeatedly were all highlights in the last quarter. However, it is worthwhile noting that of USD/CNY, EUR/USD and USD/JPY, the US dollar isn’t stronger at the end of Q2 versus where it ended Q1. Even against the EUR, though it is only marginally weaker, the US dollar has shown a reluctance to strengthen when it has the upper hand.

The USD index (see chart) remains well above the lows reached in the after of the global financial crisis, and what we’ve seen during the last few quarters in terms of volatility is on a lesser scale than what was seen then. The markets, therefore, are perhaps able to adjust to surprises somewhat more quickly. 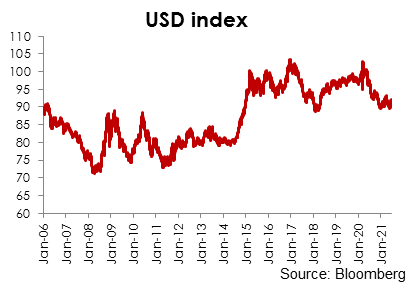 That said, this last quarter has been testing as far as the markets are concerned. In equity markets we’ve seen the narrative of ever increasing tech stock values challenged. In the FX markets, the prospect of semi-permanent inflation has challenged the recovery in risk appetite and, of course, the rise in inflation set against a more challenging recovery environment has tested the resilience of the government bond markets.

What Q2 has seemingly done as far the US markets are concerned is to make them re-assess what value looks like in terms of asset returns. As far as the US dollar goes, not only do we have to ask about what the prospect of earlier rate increases might mean for the USD, but also the US administration’s gung-ho approach to fiscal spending could prove a medium term negative risk for the dollar’s valuation.

For Q3, the questions on the USD are whether the prospect of an earlier end to the Federal Reserve’s asset purchase programme will help or hinder a dollar recovery, whether the US government will temper the spending plans of the Biden administration, and whether the risk recovery for equities will favour cyclical rather than technology stocks.

As for where the USD is heading, I suspect that it will struggle to strengthen much further against the likes of the euro, Japanese yen or pound sterling. However, don’t write off the US dollar. I suspect that renewed gains against the other majors could be around the corner, although beyond the time constraints of the third quarter.

The pound enjoyed a rally over much of the course of Q2 against the US dollar, but fell back against the euro, albeit fairly marginally, after a positive beginning to Q2, which briefly took it above €1.18. The rebound in GBP/USD was thanks mainly to an improvement in risk appetite, which manifested itself in a rise in yields, and higher equity valuations. The news on the UK economy was more positive with both the manufacturing and services PMIs hitting multi-year highs, retail sales volumes recovering to levels 10% higher than pre-crisis levels, and the damage from Covid-19 to the labour market far less than expected.

Towards the end of the quarter, the outlook for the UK economy weakened slightly, as the government put on hold the re-opening of the remaining sectors still shut (until 19th July), and gave the travel industry little reason to be hopeful for the summer holidays. The reason for the delay was a rise in Delta variant cases across parts of the UK, although the link between hospitalisations and deaths appears to have been seriously weakened.

The Bank of England revised its predictions for growth and inflation, suggesting the UK would recoup its lost economic output more quickly, but that the central bank would have to tighten policy marginally more quickly than previously anticipated. That narrative may be challenged, and it could negatively affect the pound in the medium term, but for the short term (the next 1-2 months), there is the potential for more sterling upside against the US dollar.

In Q3, the pound faces additional fundamental challenges. Firstly, the Brexit trade deal grace periods are due to roll off, meaning more stringent border checks. Could that undermine trade in both directions as it becomes more cumbersome? Of potentially even greater impact is the increase in the volume regarding a possible second Scottish Independence Referendum sometime in H2 2022. Although the polls currently suggest that Scotland would remain in the UK, the polls when the process kicked off in earnest last time (2014) were much more favourable towards the pro-union camp, and the UK was still in the European Union at that time.

So towards the end of Q3, we could see pressure on sterling build again, versus both the euro and US dollar. The risks around GBP will grow increasingly negative as we head towards year end, even as the economic news remains positive.

The EUR – Q2 finishes on the defensive; Q3 a bigger challenge

The Eurozone experienced both highs and lows during Q2. At the beginning of the quarter, the slow roll out of Covid-19 vaccinations was a key theme, and seemed to be increasing the sense that recovery in the Eurozone could be delayed. Towards the end of April, the news changed and became much improved as the EU vaccine rollout gathered speed.

The survey and economic data news also improved. Even though a number of European countries had to re-impose severe restrictions and lockdowns over the course of late Q1 into Q2, by the middle of the quarter infection numbers were falling and survey numbers were rising. In particular, the manufacturing PMI survey continued its march higher and the services PMI quickly broke above 50, ending the quarter at 58.0, indicating a rapid expansion.

However, despite the rise in activity surveys and an increase in inflation, the European Central Bank remained resolute that they wouldn’t slacken the pace of weekly asset purchases until after the summer. The euro rallied against the US dollar for most of the second quarter, but fell towards the end of the quarter, prompted by changes to the outlook for US interest rates that weren’t matched in the Eurozone.

It is that which is likely to continue to limit the euro’s upside in Q3, as the prospect of a material widening in the relative interest gap, to the detriment of the euro, will be sufficient to put the currency under pressure in the latter stages of Q3 or into Q4. That said, prior to some slippage in the EUR, there is the prospect of revisiting Q2 highs, but I just don’t see the gains being sustained. The risks, similar to the UK, are that the good news is now priced in, and it will be any unexpected interruptions to the recovery that will surprise and dismay euro buyers. 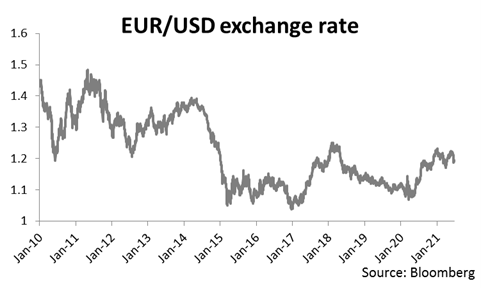 The likely limits for FX movements over the course of Q3

EUR/USD – The upside is likely to be capped before $1.23, whereas the downside is likely to be in the $1.17 region. That would be a repeat of what was seen in late Q1, which was followed by a sharp rally. This time around, though, a further repeated failure for EUR/USD to break decisively to new highs could prove to be a significant longer term setback.

GBP/EUR – GBP/EUR tested €1.18 in Q2, but showed no appetite to hold at that level. Q3 may well prove to be a similar disappoint to euro buyers, with the risks skewed towards a move back below €1.14. The pound will face greater fundamental challenges with ongoing issues around Brexit and maintenance of the United Kingdom offering potential threats.

I don’t buy into the predictions of the US dollar’s demise. Take a look at the USD index, it’s closer to its highs versus its lows over the past decade.

Equally, the pound has tried, and failed, too many times to make fresh highs to inspire me with any confidence. The story of the pound against the US dollar or euro is unlikely to have a happy ending, but I could be proved wrong.