The US elections – some initial thoughts

Regardless of the result, two things are clear. Firstly, the polling data was a long way off, significantly underestimating Trump’s popularity in key battleground states. The result of the US election could be contested, especially given how tight the races are in swing states such as Georgia, North Carolina, Pennsylvania, Wisconsin and Michigan.

So secondly, the confirmed outcome might take days or even weeks to announce, with legal challenges and the possibility of the US Supreme Court being asked to rule on the validity of ballots, particularly those received in the days after the election, if the races remain tight.

Thirdly, the Democrats must be wondering what went wrong in terms of their campaign, particularly against an unpopular President, who has been widely blamed for botching the US’s response to the COVID-19 pandemic.

Finally, the markets are struggling to get to grips with what this might mean for the US, because the outcome is so uncertain.

I thought that by this point we would have a winner, and if I’m being honest I believed that the US opinion polls couldn’t be as wrong as last time. Seeing that we don’t and that it could be several weeks before a winner is definitively announced, that uncertainty is likely to continue to stall any efforts to introduce additional fiscal stimulus to the US economy.

The path for a Biden victory is more likely than a Trump victory, despite what the betting markets may have suggested in the small hours of Wednesday morning. If he wins, and if as expected the Democrats fail to win control of the Senate, then a Biden Presidency will struggle to get major legislative change agreed, and will have to govern by Presidential Executive Order, where possible.

The reduces the likely negative effects from Biden pushing through tax and spending increases on the US economy and equity markets, the negative effects on the US dollar from a Biden Presidency are also mitigated, albeit not totally. Consequently, GBP/USD and EUR/USD are likely to shake off the drops they’ve suffered recently and are expected to rally, to levels around the $1.33 and $1.19 region over the next week or two.

The Democrats grip on power is tenuous. The US electorate have not given them the mandate to implement sweeping reforms to taxation, spending, the environment or regulation. Biden will try and repair diplomatic and trade relations, but the latter could end up widening the trade deficit and worsening the situation for the US dollar.

If the election is contested, the US dollar may strengthen in the short term, but realistically overturning the results in key swing states is unlikely. All a contested election does therefore is to delay the weakening of the US dollar later into 2020, or early into 2021.

Was the UK recovery running out of momentum prior to lockdown?

The UK enters lockdown of 5th November, the date associated with the gunpowder plot of 1605, and now one that will undoubtedly wreak more harm to the UK economy, which has struggled to recover from the first lockdown.

I’m not qualified to determine the rights or wrongs of the lockdown, or its timing, nor can I provide any meaningful commentary on R numbers, hospital admissions, ICU capacity or the proximity or otherwise of a vaccine. What I can provide some lucid commentary on is the economic position the UK finds itself in prior to entering the lockdown, and where it may find itself when it emerges from it.

In terms of the UK’s economic position, firstly some good news. The retail sector has enjoyed a healthy expansion in retail sales, such that volumes in September stood some 4.8% above the level seen in January 2020, and 4.6% higher than a year earlier. Furthermore, the UK savings ratio at the end of Q2 stood at 28.1%, the highest level it has ever reached. The UK housing market has also been buoyed with house prices growing by 5.8% in October, the fastest pace of growth since January 2015, thanks to the stamp duty holiday introduced by the Chancellor, Rishi Sunak, which is set to run until the end of March 2021.

However, UK GDP in August, as measured on a monthly basis, was still 9.4% below the level of January, and that despite the ‘eat out to help out’ scheme. Moreover, as the chart 1 shows, the PMI surveys (Purchasing Managers Index) for manufacturing and services activity have also recorded a slowdown in recent months, a further indication that the pace of activity is slowing. 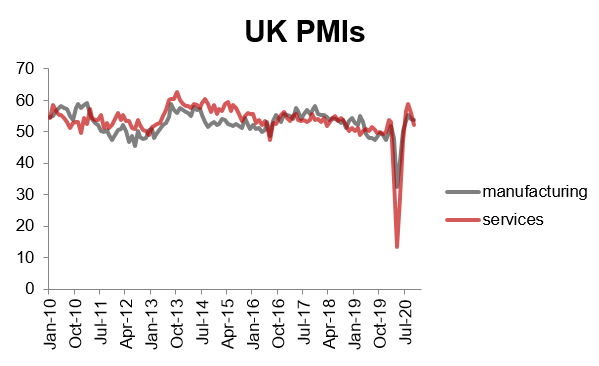 There were also increasing signs of strain in the UK labour market, with recent ILO employment and unemployment figures reflecting trends seen in the claimant count and HMRC payrolls figures for months prior.

Furthermore, though the housing market is buoyant, also reflected in the September mortgage lending data which saw the volume of loans for house purchase hit their highest level since September 2007, unsecured consumer borrowing unexpectedly contracted in the same month, remortgaging on property is around 60% of what it was prior to the first pandemic lockdown, and other secured lending is still over 12% lower than pre-COVID.

So it would seem that the UK was already slowing, and the announcement of a 4-week lockdown is expected to set back the recovery at least another quarter, if not much longer. The effects of the lockdown can be mitigated by additional fiscal and monetary loosening in the short term. Even so, I think Q4 is likely to record an additional contraction in UK activity. That could be as large as 5-7% because of the shutdown of services, hospitality and crucially non-essential retail at the beginning of three crucial months of pre-Christmas discounting, and January sales.

The ability of the UK economy to recover during the winter, and such a critical consumption period is more difficult to estimate. I sense a degree of fatigue amongst both consumers and businesses, and the impact of employment uncertainty beginning to damage spending intentions. The October GfK consumer confidence survey certainly pointed to the emergence of such a trend for households.

With Brexit also looming, the UK is facing another potential economic shock. Authorities will do their best to insulate consumers and businesses, and in the longer term the flexibility of the UK labour market, and early adoption of technology, could play in the UK’s favour in terms of recovery. Over the coming months and quarters however, a rapid rebound in activity is looking less likely, even if the optimism around a vaccine is proven correct.

The Eurozone economy requires more stimulus, it’s that simple. In fact, it’s been so obvious for some time, that I was a little surprised the European Central Bank didn’t sanction it last week. However, the ECB Governing Council was being cautious, as usual, not wanting to alarm the markets by making a move before warning them about it.

The warning from the European Central Bank came via a not so convoluted comment in the ECB’s statement, accompanying the October decision. There it said that “the new round of Eurosystem staff macroeconomic projections in December will allow a thorough reassessment of the economic outlook and the balance of risks. On the basis of this updated assessment, the Governing Council will recalibrate its instruments, as appropriate, to respond to the unfolding situation and to ensure that financing conditions remain favourable to support the economic recovery and counteract the negative impact of the pandemic on the projected inflation path.”

If those projections for growth and inflation are revised down, and let’s face it the forecasts will be revised lower, at least the short term projections, this provides them with more room to loosening monetary policy. The ECB continues to implore Eurozone governments to do more in terms of fiscal loosening, but in my opinion, it will loosen nonetheless.

Even without the renewed lockdowns in places such as Ireland, France, Italy, Spain and Germany, the trend in Eurozone inflation data was worrying. 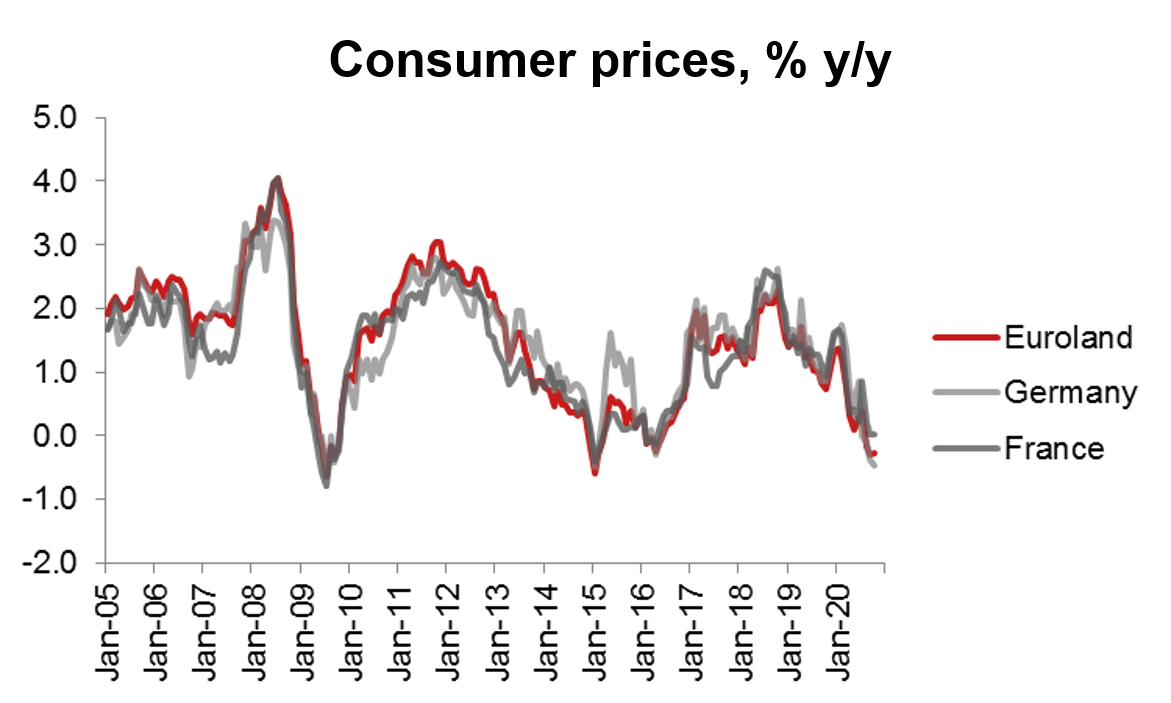 The trend on inflation was already downward towards the end of 2019, and that downtrend has persisted during the first wave of the pandemic and thereafter. With additional negative pressure being exerted on the Eurozone economy, creating extra spare capacity, further deflationary pressures are likely.

The door is therefore open for additional money printing from the European Central Bank, and it is likely to be of the order of at least €300bn, and possibly as much as €500bn.

There is also the need for additional fiscal stimulus as well. Many fiscal levers are automatic, linked to the level of enforced restrictions imposed by European governments. Will this, alongside the monetary loosening, weaken the euro? It certainly could, but other countries/currencies face similar challenges. If the European Central Bank cannot turn the tide of deflation with these additional measures, and has to loosen further, then it is likely to make the euro’s position more precarious against other majors into the second half of 2021.

Remember Draghi’s big bazooka for monetary policy during the last wave of deflation? What ammunition can Lagarde deploy against its return?

P.S. Registration for The Secret Economist is only open for a limited time only, so sign up today to receive the updates direct to your inbox

The views and opinions expressed in this article are those of the author, The Secret Economist, and do not represent moneycorp or any affiliated entity.