The Budget, Brexit and beating Covid-19

2021 is so far shaping up to be a year of two tales, namely Brexit and Covid-19 once again dominating and also defining the eagerly anticipated Budget announcement. Nevertheless, we are seeing sure signs of the Government shifting gears from ‘survive’ to ‘thrive’, with the economy forecast to rebound in 2021, with projected annual growth of 4% this year. How to unlock the UK, and its economy though, is going to take time.

Let unlocking commence for the UK

The UK government has announced a detailed plan to unlock the economy, beginning on the 8th March with schools reopening and some outdoor meeting allowed. That will be followed by the 29th March, with the rule of six and stay at home rule to end, outdoor sports facilities to re-open and organised outdoor sports to resume. All shops, restaurants and pubs will be allowed, gyms and spas, domestic holidays, indoor play centres and zoos and theme parks to re-open no earlier than the 12th April. By no earlier than the 17th May, more indoor venues can possibly re-open, and international leisure travel could restart. The final phase comes no earlier than the 21st June, with no legal limits on social contact remaining, and nightclubs re-opening.

That said, the government will continue to be informed by the numbers of infections, hospitalisations and deaths, which could slow the process of unlocking the economy. There are a number of questions regarding the strategy:

• Is there sufficient time between each element of unlocking (5 weeks) to measure the impact of these on infections?

• What threshold are the government working to in terms of increases in infection levels and hospitalisations that are acceptable (if any)?

• How much additional support are the government prepared to offer businesses and individuals whilst the unlocking process is underway?

The Budget has in some way answered that last question, to an extent. The Chancellor outlined a number of changes to furlough and business support measures, including:

• No changes to rates of income tax, national insurance or VAT

• Business rates holiday for firms in England to continue, until June

Other points, such as the extension to the furlough scheme and stamp duty holiday had already been reported in the press.

In the Secret Economist’s opinion, now is not the time to be tightening fiscal policy materially. There will be plenty of signals that the need for further fiscal support has receded and therefore the government can withdraw it, and they may well be able to start the process of tapering that relief within a matter of months. However, they should not go too far too fast, which matches up with what the Chancellor announced. The labour market still has a large proportion of workers displaced, with estimates putting those numbers (employed and self-employed) up over 2.2m versus pre-pandemic levels (Universal Credit claimants – in payment and not in payment). The Office for National Statistics also reported that, by early February, roughly 6.5m workers were on furlough, up from 6m the previous month. 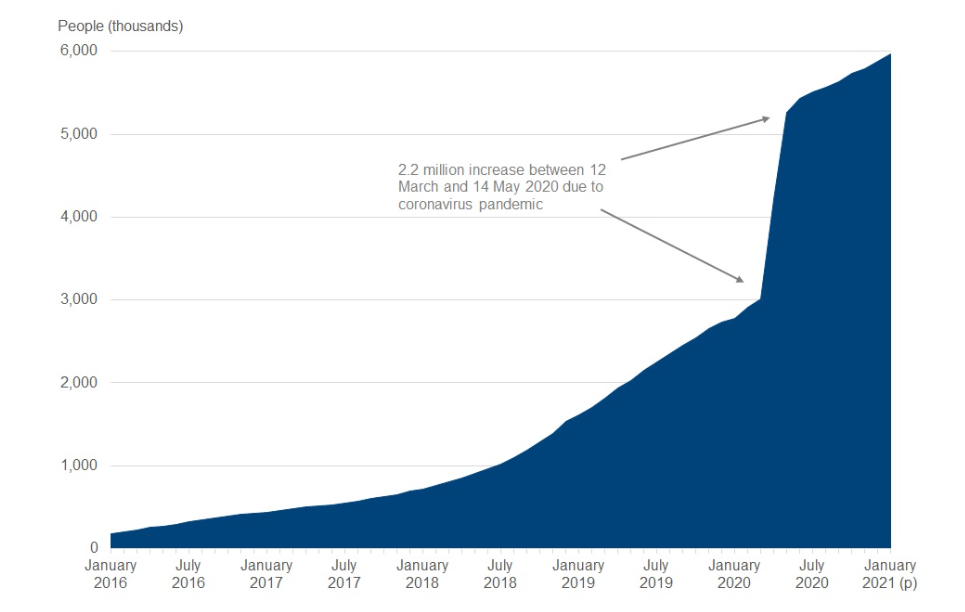 There is one more question, and that is what this all means for the pound? Over the course of 2021 so far, the pound has continued its rally against the likes of the euro and US dollar, significantly outperforming other majors against the US dollar. The rally has been very impressive, but the pound is arguably now at levels that are unjustifiable based on fundamentals. Certainly the move up from $1.35 and €1.1350 looks to have had little to do with any material changes to the UK’s economic outlook.

In the coming quarters, the first mover advantage of unlocking for businesses is likely to fade, and with it the UK’s economic recovery should also slow. It is far more likely that the UK will recoup all of its lost output by the end of 2022, or early 2023. Consequently, I’d expect the pound to slip over the upcoming quarters, and find it difficult to sustain rally beyond recent highs as the oxygen gets thinner. Equally, as the economy returns to normal, so I would expect the trade flows to normalise, which could mean a significant increase in the currency requirements around the UK’s net trade imbalance. The pressure is likely to build on the pound as the UK returns to ‘normal’ and other economies catch up.

Catching up is hard to do for Europe

Mainland Europe’s big problem remains that the vaccine delivery programme is still taking a long time to accelerate. Secondly, Europe has created a rod for its own back by some countries suggesting the Oxford/AstraZeneca vaccine was ineffective for over 65’s. Europe was late to begin the process, by a matter of weeks, but the pace of delivery has not materially improved either. That failure potentially means that Europe reaching herd immunity will take longer, and require restrictions to remain in place for longer also. 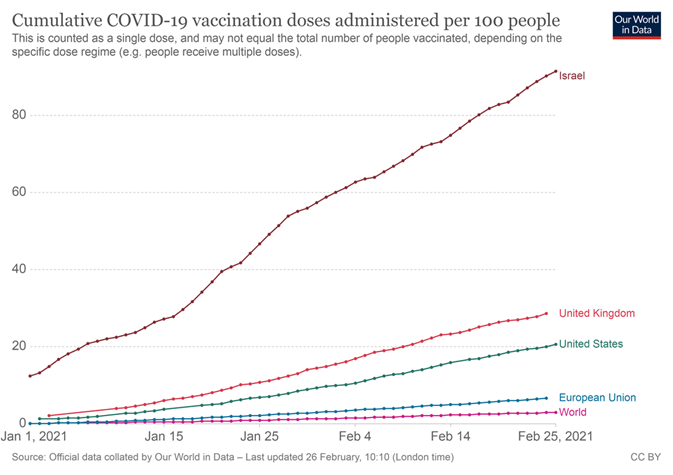 What is paramount now is that Europe rectifies the vaccination problems as soon as possible. Outgoing German Chancellor, Angela Merkel, has stated that Germany is looking to rapidly increase the pace of vaccinations to between 6.5 to 9.5 million doses per week, but has provided no detail of how Germany aims to deliver that, nor where the additional supplies will come from. With over 1.5 million doses of AstraZeneca vaccine delivered, but less than 20% deployed, because of rejection, governments across Europe have made an uphill task even more difficult.

It’s logical to assume that vaccine supplies will increase in scale, so will there be a rapid catch up from the likes of European countries later in the year, and will this diminish the economic impacts of the slow start to vaccinations across mainland Europe?

The European Commission in its 11th February 2021 forecast expected that the Eurozone would grow by 3.8% in 2021 and the same in 2022. These figures are significantly lower than the expected growth for the UK economy projected by the Bank of England, but I would argue could be subject to significant upward revision (to around 4.5% for both 2021 and 2022), particularly if the second half of 2021 sees Europe catch up momentum on vaccine delivery, as governments have suggested they aim to achieve.

In the meantime, the euro’s underperformance in FX markets does seem to have been arrested, and it is likely will be reversed over the course of the second half of 2021 as Europe catches up. The euro though cannot make further independent gains against other majors without it having a negative effect on consumer prices. As such, any strength unique to the euro against the likes of the US dollar and pound sterling may become a matter of concern to the European Central Bank, increasing the pressure for additional monetary loosening, or at the very least lengthening the time period before the ECB considers tightening monetary policy once again.

No more setbacks for the US, hopefully

The US government is rightly fully engaged in attempting to deliver on a policy to alleviate the effects of the Covid-19 pandemic. The $1.9 trillion package of measures will provide more money to households and businesses, as well as better equip the healthcare system to deliver vaccinations and lead the fightback against infection.

Whilst the package of relief measures are well intentioned, they do little to alleviate the problems of the labour market, and the almost 10m workers who remain out of work versus pre-pandemic levels. It is this issue that may determine whether the Biden administration is judged a success or otherwise, and realistically only just over three years to deliver that outcome.

The average net gain in payrolls has been just 96.5k since the beginning of 2010. Even stripping out the large falls (and gains) in payrolls seen post the financial crisis and during the coronavirus pandemic, the net monthly gain is 207k, or an annualised pace of just short of 2.5m. That would mean it would take all of the first term of Biden’s presidency before the employment level is restored to pre-pandemic levels. The jobs markets has further demonstrated its fragility in recent weekly jobless data that has suffered numerous setbacks as the Covid-19 infections have risen and fallen. Consequently, the US labour market is many months, perhaps many quarters, away from restoring more normal trends and patterns of hiring. 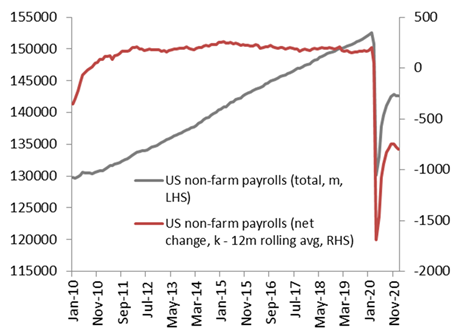 Whilst the US authorities are currently focusing on relief, they will soon turn their attention to recovery. It does not appear that the new administration is prioritising a jobs recovery per se, and the $2.2 trillion package of spending Biden plans to bring forward post the $1.9 trillion, talks about the creation of 4 million new jobs, but provides no time horizon.

Financial markets are concerned about the implications of all of this additional spending on taxes, growth and inflation. The recent increases in US yields provide ample evidence of these concerns, and may make it harder for any US government to deliver on its spending priorities.

Recent risk rallies have receded also, offering the US dollar some much needed relief from the market selloff it has endured. The gains for the dollar based on this alone are likely to prove limited, but FX markets have moved to a position that is unsupported by fundamentals and recovery expectations, so there is room for additional dollar gains over the coming weeks.