Can Biden deliver on his ambitions, will the EU manage to speed up its economic recovery with faster vaccination rollout, and with negative interest rates off the table, could sterling see any additional gains?

What does Biden need to achieve in his first 100 days?

As far as measures of success go, his first 100 days may be split between the economic and pandemic. Joe Biden was inaugurated as the 46th President of the United States on Wednesday 20th January. His administration began strongly, with a raft of executive orders signed to immediately U-turn the Trump administration’s strategy towards climate change, trade and diplomacy.

His Treasury Secretary, former Federal Reserve chief Janet Yellen, embarked on an intensive effort to gain support for a proposed $1.9 trillion fiscal package, but that encountered early cross-party resistance in both of the other arms of government. The package of measures is targeted towards offering households more income support, businesses more relief if they remain adversely affected, with hundreds of billions of dollars extra for the healthcare sector to treat coronavirus and vaccinate against it.

These measures are relief, rather than stimulus. The Biden administration made a lot of promises during its campaign that now need to be delivered on, but let's analyse just one.

In his campaign Biden regularly referred to this. He talked of higher wages (via a minimum wage hike to $15 per hour), better benefits (statutory paid sick days and 12 weeks of paid family and medical leave) and stronger unions and workers’ rights. He talked of Made in America (sounds a lot like America First), with a Buy American programme for the federal government, and bringing critical supply chains back to America. There was a $2 trillion pledge for clean energy, and pledges to rebuild America’s crumbling infrastructure. Such as they are, these proposals suggest higher government spending, and higher prices.

Can Biden deliver on these ambitions and are they priorities? According to the December non-farm payrolls data, there are still over 9.8m fewer payrolls following the pandemic displacement. Surely President Biden’s task should be to fully focus on returning the economy and jobs market to their pre-pandemic levels, shouldn’t it? 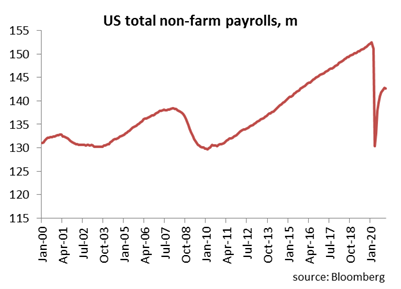 That means first and foremost recovering the lost jobs, lost output (GDP is still over 2.5% beneath its pre-pandemic peak (Q4 2020 versus Q4 2019, whilst for the whole of 2020 vs 2019, output was 3.5% smaller), and activity, investment and confidence in small businesses. Only thereafter is it sensible for any administration to then embark upon an ambitious transformation programme that is likely to be funded from higher corporate taxation.

His attempts to rebuild some diplomatic and trade relations are also laudable, but given the other suggestions regarding prioritising US production and supply chains, the proof will be in whether there is any re-commitment to US-China trade agreements, or some loosening of steel, aluminium and aircraft tariffs?

Economically, signs may be restricted to any additional fiscal relief being shown to cut through in terms of elevated consumer spending.

In terms of his plans for combating coronavirus, which may be a more pertinent in regard to a more lasting recovery, further, consistent declines in infection and death rates, and increasing rates of vaccination, will be the minimum expected.

As for the US dollar, will the administration reinstate the longstanding strong dollar policy that was abandoned by the Trump administration, and will it matter? With the amount that Biden wants to spend, the prospect of higher taxes and higher deficits could blight dollar sentiment unless the House of Representatives, or the Senate, clip this administration’s wings regarding how much spending they are prepared to sanction. However, how much of the spending is already priced in? If the other chambers of government do push back on more spending, which looks a reasonable prospect given that some Democrats in the Senate are already nervously looking over their shoulders at the mid-term elections, then could the US dollar actually bounce back? Given how much the US dollar has fallen in the past 12 months (7.7% on a trade weighted basis) and how the markets are already positioned, surely the markets are at risk of an unexpected dollar rebound?

The European Union have, to put it simply, really fouled up the process of securing vaccine supplies to mass immunise its population. There has been balanced and fair criticism of the process from within the EU, notably lawmakers in Germany, who suggested the EU was too slow and too cost focused regarding this. The EU also supported some potential vaccines that have simply not paid off, at least not yet. The EU in turn has hit back, alleging that it was individual states that were responsible for paying for their supplies, that they have been let down by suppliers, but none of these matters.

EU citizens don’t care about process, or how things will be paid for, or for that matter the intricacies of contractual law, but whether those acting on their behalf have secured enough vaccine in order to return economies swiftly to normality. In the EU’s case, regardless of what has happened, or who is to blame, the answer is no, and so its citizens will blame the EU, who loftily claimed that its collective approach to negotiations would prove more effective in securing supplies and getting them at better pricing.

Why does all this matter? Because the slower the rollout of vaccinations, which are running at about an eighth of what the UK is currently achieving, is likely to undermine the prospect of any relaxation in lockdown restrictions in the near term, which could delay the recovery by a few months, if not a quarter or two. The European Union might not reach herd immunity on COVID until much later in 2021 or even 2022. In turn this undermines the prospects for 2021 growth versus expectations (which the IMF recently forecast at 4.2% for 2021) and could cut percentage points from that growth. Without mass vaccination and herd immunity, Euroland runs the risk of renewed lockdowns or tighter restrictions if infections spike again. Its travel and tourism industry could be blighted for another year, and the damage to labour markets, which have weathered the pandemic well so far. In short it could further blunt its recovery or throw it back into downturn.

Against all this, the euro has done well to hold onto the bulk of its gains so far. Add into that mix that some European Central Bank officials have suggested that the market is under-pricing the risks of an additional cut to the deposit rate. The EU’s blunder over vaccine supplies risks increasing the headwinds that the euro faces versus major currencies, over the months and quarters to come in 2021. Could EUR/USD be more likely to test $1.15 than $1.25? Could GBP/EUR breach €1.15, rather than €1.10?

UK – negative rates are off the table, but were they ever on it?

Briefly, towards the back end of last year, the prospect of negative UK interest rates reared its head again. Some members of the Bank of England’s Monetary Policy Committee seemed to be in favour of at least exploring deploying negative interest rates, whilst others, including the Governor and Chief Economist were far from supportive.

The issues for me were always whether it would prove possible to prevent negative rates from punishing businesses, versus trying to encourage banks to lend, as was the stated intention, when the Bank of England began to investigate, and whether it was necessary. To be clear, I never expected the Bank of England to deploy negative interest rates, since the risks always outweighed the potential rewards.

In terms of whether it was possible to prevent businesses from being punished, the answer was probably not. At least in some form negative interest rates deployed from the Bank of England to UK lenders would eventually prompt an additional reduction in deposit rates in all likelihood. That has certainly been the case in other countries/economies that have deployed negative interest rates, and would be difficult, if not impossible to regulate against.

As to whether negative rates were/are necessary, as has been stated in previous articles, the most likely path to negative interest rates was some sort of even driven shock, such as a no-deal on UK/EU trade post the Brexit transition period. With that risk now off the table, it is difficult to see what would prompt the arguments to re-strengthen in favour of negative interest rates, short of a total failure of the vaccination programmes.

The focus for the UK is to drive recovery, particularly in the non-essential retail and retail services sectors. That is likely to be achieved by further rolling out the vaccine to the UK adult population and older children. The UK’s fiscal position is not going to materially worsen from where it is currently, but support for those employees still displaced, and businesses still forcibly closed means it won’t improve much over the coming months either.

Negative interest rates were not, and are not necessary for the UK. Equally a rate rise is not likely to come before 2024 at the earliest. The reduced risk of negative interest rates being implemented in the UK has proven positive for sterling, and that may mean that it holds up at close to current levels (multi-year highs against the US dollar and multi-quarter highs against the euro) for the coming weeks, but additional gains in the pound from here look more difficult to achieve.