Will the vaccine be a bigger shot in the arm for the UK’s economy versus the rest?

The news in the last month has been very positive on the vaccine front. Trials from major pharmaceutical companies have demonstrated that three vaccines create an immune response in a sizeable proportion of those in the trials. The market response has been predictable, with a big risk rally prompting equities to push higher, along with government bond yields, commodity prices rallying (with the exception of precious metals), and the US dollar and other safe haven currencies suffering at the expense of the pound, euro, Aussie dollar and other risk based currencies.

The news flow has slowed recently, and the impetus behind the jump in risk appetite has dissipated with it, but sterling has been a more significant beneficiary than other currencies during this vaccine-driven rally. Why?

The simple explanation has been that, because the UK economy was the worst performing economy during the lockdown in Q1/Q2, and then the strongest performing during the economy’s unlocking in Q3, the markets expect a continuation of any upswing to output into 2021 and beyond.

On the face of it yes, but it misses some very important points. Firstly, as the Chancellor recently pointed out in his Comprehensive Spending Review, the UK economy will not fully recoup the pre COVID levels until Q4 2022, and will still be 3% smaller in 2025 than was forecast in the March Budget.

Secondly, the UK labour market does not recoup its losses, in terms of unemployment rates until beyond the forecast horizon, so at every stage unemployment is set to be higher than it was pre-pandemic, and that is likely to prompt lasting damage to consumer spending.

Thirdly, a prolonged period of high government borrowing, as envisaged by the Chancellor, risks incurring the wrath of the ratings agencies, such as Moody’s, S&P and Fitch. Should the UK suffer another ratings downgrade, or even the threat of one, that could impinge on the amount of additional borrowing that could be undertaken, increasing funding costs or prompt a run on the pound. We’ve been here before in terms of a run on the pound, and that was also driven by a decoupling of the UK’s relationship with Europe, although last time it was the UK’s exit from the Exchange Rate Mechanism, on the 16th September 1992.

Finally, the UK will be looking to grow its trade with other countries. That won’t happen overnight, as other nations/economies will be suffering from the post pandemic hangover as well. Regardless of whether the pound is competitive or otherwise, the path to stronger export growth won’t be smooth or rapid.

On the flip side though, the post pandemic world may throw up some surprises that play favourably in terms of the UK economy.

The digital economy has been a major winner in terms of the pandemic and lockdowns. The UK has, and continues to embrace the digital economy more readily than its counterparts in the rest of the large developed economies. Notably, this has been starkest in terms of online retail, which was briefly above 30% of all retail during Lockdown I, and, according to October retail sales figures, rose as the country headed back into tougher restrictions, and was back above 28% of all sales transacted.

The housing market/general construction sectors have also seen a sizeable improvement in activity. The monthly construction output figures have recovered strongly, and output is now down only 8.4% from where it began 2020. Meanwhile, housing transactions and house prices have bounced strongly, with transactions at their highest monthly level since 2016, mortgage approvals at a 13 year high, and house prices having recouped all of their losses earlier in the year, thanks to the temporary stamp duty holiday offered by the Chancellor. 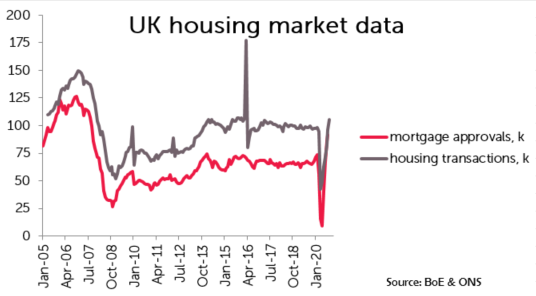 The biotech and pharmaceutical industries have also been the beneficiaries of significant investment because of the pandemic, and the outlook for these remains upbeat, with a joint venture between AstraZeneca and Oxford University on a vaccine seeing a strong immune response to their ‘cheap to deliver’ derivation.

Finally, the UK does benefit from having greater flexibility in terms of labour markets and investment. That could mean it is viewed as a low cost alternative to establish headquarters, manufacturing hubs and European subsidiaries in a post pandemic world.

This remains contingent on Brexit trade discussions, of course.

So a simplistic take that, because the UK fell most sharply, it should bounce back most quickly is complicated by geopolitics, the size and shape of the economy, labour laws, taxation policy, tariffs, currency and credit ratings issues.

We may not know for the next few years at the very least whether the UK economy is bettering its main rivals in the western world, and the ‘snakes and ladders’ game for the global economy generally is likely to mean the pound, euro, US dollar and other major currencies are all in for a bumpy ride.

Euroland – Sticking with PEPP and co for now

Firstly, this is nothing to do with Manchester City, despite their underperformance thus far this season.

There has been some discussion in the past about the possibility of negative interest rates from the European Central Bank, as the pandemic has seen renewed spikes in infections in recent months. Ahead of a pivotal year end Governing Council meeting, a number of ECB speakers, including the President, Christine Lagarde, have ruled that out, for now.

Instead, the measures they intend to use are the ones that they have used thus far to support the Euroland economy in recovery.

The first is the Pandemic Emergency Purchase Programme (or PEPP), which was launched in March 2020.

It is additional to other asset purchase programmes the European Central Bank had been running to support the Euroland recovery from the financial crisis, sovereign debt crises and deflation (remember Mario Draghi’s big bazooka back in 2015?).

The PEPP was expanded in June from its initial €750bn to €1.35 trillion, where it currently stands. Will the total amount to be bought be increased in December? One might think so, but given that total purchases stand at under €700bn as at the 20th November, any expansion might be more modest versus the first two increases in the €250-350bn range. That said, the ECB may be more inclined to accelerate the current purchases, to use up more of the available headroom first, before expanding the programme further.

There is a second string to the ECB’s bow. These are Targeted Longer-Term Refinancing Operations (TLTROs).

Designed to stimulate bank lending by offering Euro Area commercial banks cheap funding, this was first utilised back in June 2014, followed by a second programme in March 2016, and a third beginning in March 2019. Current lending rates are outlined in this press release link from the ECB, which is summarised below.

Further cuts to the TLTRO interest rate isn’t likely to prompt additional further lending, but coupled with the PEPP programme, and additional fiscal stimulus, these could prove more effective than negative official interest rates, especially as the TLTRO programme provides lenders with negative rates in any case.

On the fiscal policy front, Germany announced recently it intends to almost double new borrowing versus what it had previously planned for, in 2021, something that could lead to other countries following suit given renewed lockdowns and restrictions.

All this may keep a lid on any supplementary euro gains, as we head into 2021. The economic recovery in 2021 may get off to a slow start, if the winter prompts another increase in infections and further restrictions or lockdowns.

The path of recovery in Euroland is not set to run smooth until the positive news on vaccines actually delivers in terms of at least one mass distributable vaccine for COVID. The ECB’s monetary policy decision in the run up to year end won’t materially alter the timing of the economic recovery, BUT it could limit the extent of any additional lockdown related contractions.

The US housing market – what’s behind the apparent boom?

Data from the US housing market has shown the sector to be more robust than expected, especially given the dislocation that has occurred during the ongoing coronavirus pandemic.

So what’s going on, and what might be the root causes of the housing market’s seeming resilience?

Let’s first look at some of the data.

In terms of residential real estate transactions, there was clearly a bit of catch up being played after a dramatic slowdown earlier in the year. Existing home sales are at the highest level in 15 years, but bear in mind they slumped to 2008-09 financial crisis lows when the pandemic struck. Figures for existing and new home sales are annualised, so perhaps exaggerate the scale of the recovery, but as the chart below shows, the recovery is still impressive nonetheless. 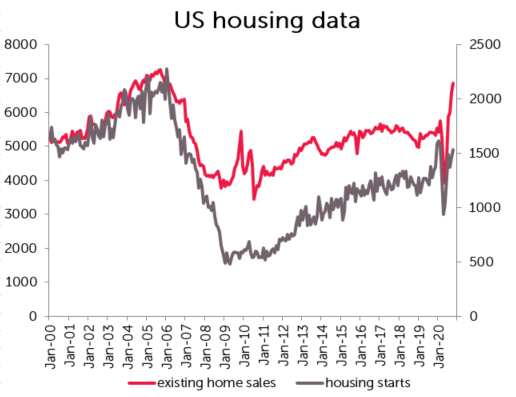 The upward trend in housing starts has continued as well. These haven’t reached pre crisis levels, but have recouped the vast majority of activity, and bearing in mind these are starts, suggests house builders are confident that this trend will continue, in spite of the economic headwinds faced, rather than just be a flash in the pan. 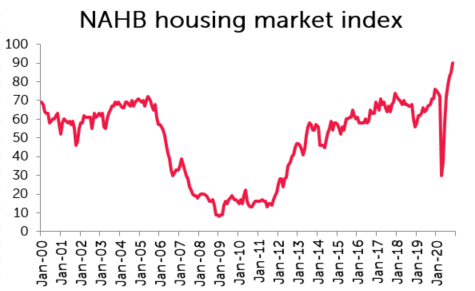 Part of the reason is likely to be driven by monetary conditions. The Federal Reserve has signalled its intention to keep monetary policy as loose, or looser, for the next 2-3 years at a minimum. With official interest rates at zero, and the Federal Reserve pumping trillions of asset purchases into the system, housing demand is likely to be high because of the weakness of other asset market performance/returns. Furthermore, most of the dislocation in employment is still viewed as temporary, rather than permanent, and has disproportionately hit lower income jobs, where demand for home loans is likely to be low.

Into year end and Q1 2021, it will likely to persist, and, provided there are no setbacks on the vaccine front, then 2021 could see further gains in the housing market. Beyond that though, the pace of growth is likely to slow and the housing market has not seen any fall in prices, even during the height of the pandemic. Prices were 12% higher in October 2020 versus 2019, according to the National Association of Realtors, and are up over 31% in the last 5 years.

Consumer prices and average earnings are up 1.2% y/y and 4.5% y/y respectively, and over the last five years, the consumer price index is 9.5% higher, whilst average earnings are 17.1% higher. Wages and prices are growing far more slowly than house prices. Affordability is therefore becoming more challenging for the US homebuyer. This could again prove problematic with US interest rates unlikely to drop back further under a new President, with plans to significantly increase US government spending.

Housing might not be the driver for a new crisis, but could itself suffer as the recovery path becomes more difficult. US authorities already have plenty to navigate, but it is difficult to see where the additional gains in housing will come from. Unless of course, those same authorities are prepared to accept deteriorating credit lending standards, and we know what happened the last time that occurred.