Road tripping through California: a dream waiting to come true

A road trip through California is on many people’s bucket list and a dream waiting to come true. As there’s so much to see and explore, we will share the best places for you to go to in this travel guide.

It all starts with renting a car or camper van. A great thing about the US is that fuel is a lot cheaper than here in the UK. Most Americans drive around in big pick-up trucks and vans, so don’t be shy when choosing your house on wheels for the trip.

One thing to remember is that it can be difficult to find a parking space in the big cities, especially when you’re driving around in a large motorhome. Even though it may sound like a great idea to hire a big motor home and feel like a king on the road, it’s not always very practical.

2. Los Angeles, the city of the walk of fame, flowers and sunshine

A road trip through California often starts with Los Angeles. Everything here is, as you would expect in the US, big: from hotels to buildings and roads to cars.

Between Los Angeles and San Francisco you will find Big Sur (Highway 1), probably one of the most beautiful roads in the world. You can drive Big Sur both ways: from Los Angeles to San Francisco and the other way round. The benefit of driving from San Francisco to Los Angeles is that you’ll be on the right side of the road and there’s plenty of opportunity to easily pull over and take amazing pictures.

Make sure you check the roads before you leave, as sometimes parts of the highway are closed due to loose and moving rocks. And don’t forget the lovely coastal villages which are begging to be explored.

Los Angeles is well-known for its famous movie stars and celebrities. Pretend to be famous for an hour and visit the walk of fame, which features more than 2,000 stars.

3. Put on your boots and go on an adventure in California’s National Parks

The United States is full of national parks and California is the proud owner of nine. Ask any American what is so great about California, and they will tell you about its endless beauty.

We’ve listed the top 3 parks for you to go to, but quite honestly, you can’t really go wrong. Each park has got its own unique feature and will take your breath away.

Joshua Park is HUGE. It covers 3200 km2, and has been named after its 900 year old yucca plant. It’s got an important ecological function for the Mohave Desert and is a true oasis for climbers and people who love trekking.

The park is full of enormous rocks and you will find lots of different flora and fauna. You can also still see where they used to dig for silver and gold. If you’re lucky, you can even get a glimpse of the Mexican border on a clear day.

You won’t be able to find any hotels in Joshua Tree Park. However, there are nine camp sites where you can stay overnight. Booking in advance is always recommended to avoid disappointment. Try the Black Rock Campground or Indian Cove Campground. If you don’t like camping, there are many hotels outside the park.

On the Eastside of the park, you will find flatter areas where you can go enjoy a good hike. If you’re more into rock climbing, then the pointy and steep rocks on the Westside will keep you entertained.

It’s worth mentioning that the Westside of the park is not accessible for motorhomes longer than 21ft.

Whatever you do, don’t skip a visit to the Yosemite National Park. This is definitely the most well-known national park in California, and maybe even in the whole of the United States. It covers nearly a whopping 2000 km2 and is very diverse. You will find glaciers, waterfalls, and lots of incredibly large trees.

If you’re short on time at Yosemite National Park, make sure you visit the following highlights: 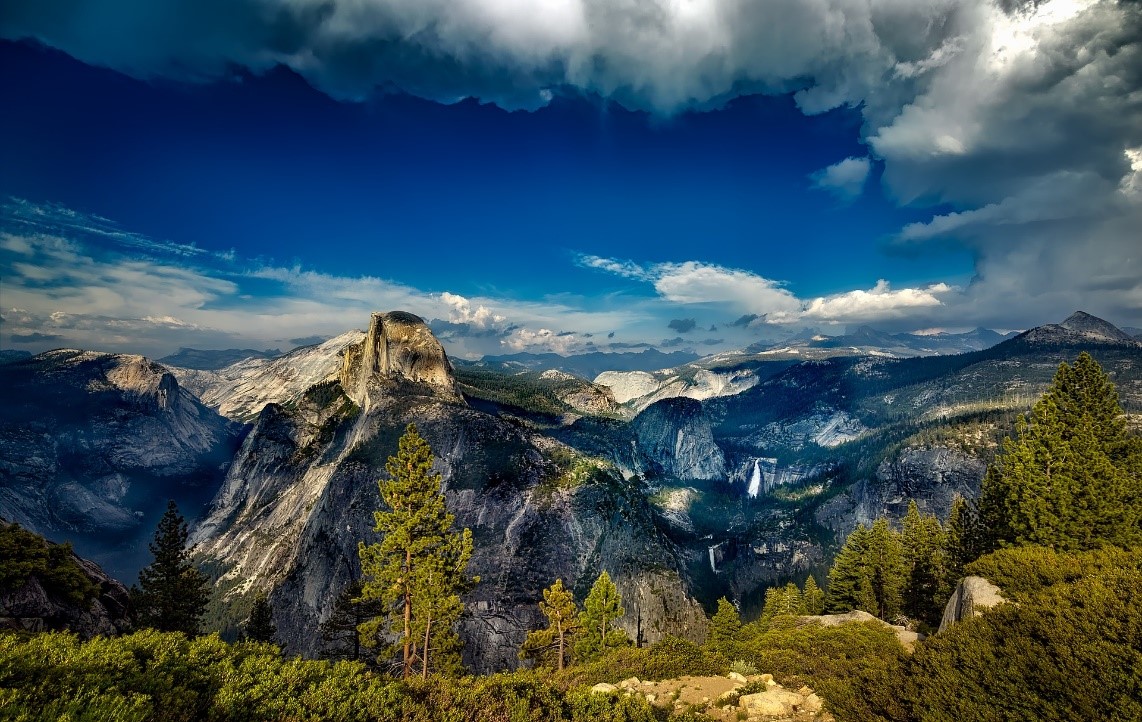 Another great city you need to visit! Some even say this is the most beautiful city of the whole of the United States.

Rent a bike and cycle on the Golden Gate Bridge

Is there a greater way to see one of San Francisco’s main tourist attraction? Rent a bike and enjoy the amazing views from the Golden Gate Bridge.

Every year more than two million tourists travel to Lombard Street. What is so special about this street you may ask? Lombard Street is the proud owner of the world’s most crooked street. It’s got 8 hairpin bends and it’s incredibly steep.

San Francisco’s cable car is very iconic. It’s the only manually operated cable car left in the world. Despite it being crowded with tourists, it’s still a great way to explore the city and overlook the hills of San Francisco. There are three different routes, of which the Powell-Hyde route is the most popular one, mainly because of the view over Lombard Street.

Quite possibly the most famous road in the world: 2,400 miles, crossing 8 states. For many people, route 66 used to be one of the main reasons to go to California. Officially, route 66 doesn’t exist anymore since 1985. However, you can still drive on 80% of the original route.

San Diego is seen as the little brother of Los Angeles and San Francisco and therefor often gets skipped, which is a real shame. San Diego has got lots of things to offer and it’s definitely worth a visit.

Balboa Park is a place where culture, nature and art come together. It’s a fantastic place where you can take a break from the busy cities. It’s got a long history, so you won’t be surprised to find 17 museums, floral gardens and San Diego’s Zoo.

If you like sports, you might want to watch a rugby game. Don’t miss the lively streets of San Diego. Especially at night Old Town, Gaslamp Quarter and Little Italy come to live.

Pre-order your Dollars before you go

This allows you to lock in our best rates and could save you money to spend during your holiday!

Why choose our Reserve & Collect service?

- Orders can be placed up to two weeks in advance, and no less than 24 hours before collection’

- Place your order quickly with no upfront payment

- Pick-up from one of our major airports or central London locations.

What are you waiting for?

The information above was accurate at the time of publication. moneycorp and its affiliates expressly disclaim any liability for the completeness or accuracy of the information contained on this page which may be subject to change.

Did you know? We can deal in over 80 currencies